Moa is a municipality and an industrial city in the Holguín Province of Cuba. Its name is believed to mean "water here".

Moa, one of the youngest cities in Cuba, was founded in 1939. One of the most significant personalities linked to its foundation and growth was a Jamaican man, John Alexander Christie Duccas.

Large nickel and cobalt deposits located in the Moa area are exploited in part by a joint venture with the Canadian company Sherritt International. The extensive mining and nickel processing has large impact on the local environment. The coastal waters and nearby land is contaminated by the pollution from mines and processing plants. The soil has a reddish tint due to the iron ore in the ground.

The nickel production is concentrated on the factories "Pedro Soto Alba" and "Ernesto Che Guevara". While the Nickel Processor Plant "Pedro Soto Alba" is a limited liability company between Cuba and Sherritt International Canadian Company, the "Ernesto Che Guevara" belongs to the government enterprise Cubaníquel. As average per year, The "Soto Alba" and "Che Guevara" produce more than 30,000 tons of nickel each. This industry is what makes Moa a leading nickel producer, and what brings the town most of its GDP.

The city is served by the Orestes Acosta Airport (IATA: MOA, ICAO: MUMO), a regional airport with daily flights to Havana. It is crossed in the middle by the state highway "Circuito Norte" (CN), the second longest one after the "Carretera Central".
This dGuide uses material from the Wikipedia,
released under the Creative Commons Attribution-Share-Alike License 3.0. 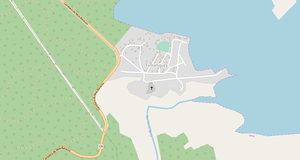